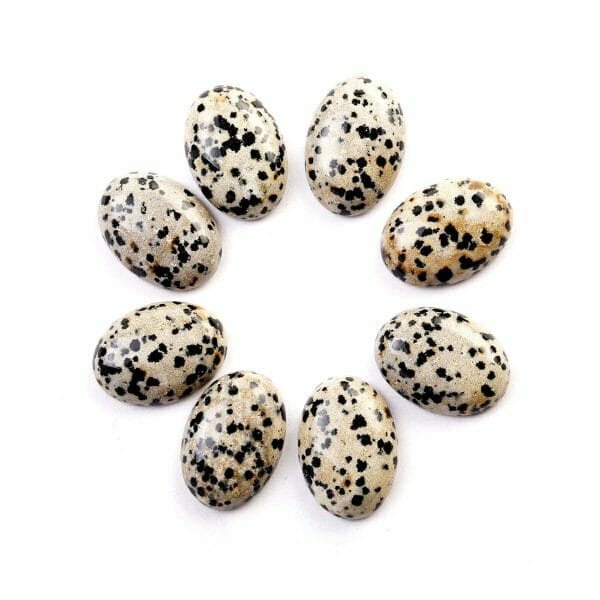 Dalmatian jasper, better known as Dalmatian stone, is typically found and mined in Chihuahua, Mexico. The distinctive gemstone was named "Dalmatian" due to its likeness of the "fire engine" dog. This opaque, white spotted with brown and black will make people turn around and look back when they walk past you.

Dalmatian Jasper Cabochon is a rarity that can be seen in the natural landscape of the earth, mainly in the world's most ancient countries, such as Egypt, Myanmar, Iran, Laos, Madagascar and the United States. Dalmatian Jasper Cabochon is a stone that has been treasured for centuries. It is believed that this stone is capable of providing physical, mental and spiritual strength, and is often used as talismans of protection.

YLELY is a leading manufacturer in GEM processing and exporting with over 12 years experience. We offer one-stop service for customizing Dalmatian Jasper Cabochon and other gemstone products for your needs. Whether you are a wholesaler, retailer, or local business, please let us know your ideas and requirements (image, size, your favorite gemstone types ), then we will do our best to meet them. We could also provide a variety of export shipping options to help you save cost.

Since these stones or crystals are natural items, please allow for some variation between each item. These stones will be very similar, but not identical, and each is unique.

Natural gemstone products may have slight imperfections, which are not quality issues and will not affect the use.